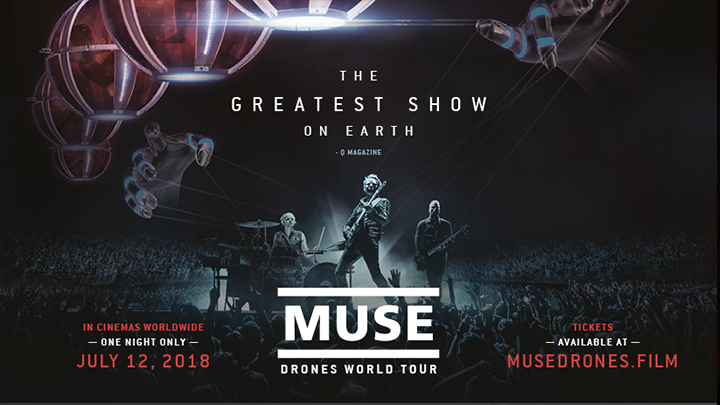 Alternative rock band, Muse, have released their Drones World Tour in cinemas for one night only across the world, giving fans a large screen view of the 2015/16 international show. The one-off screenings will be a chance for Muse fans worldwide to come together for the unique film, which will be shown on July 12.

Throughout 2016, the Drones World Tour was filmed at multiple concerts showcasing the band’s career-spanning hits including ‘Psycho’, ‘Madness’, ‘Uprising’, ‘Plug in Baby’, ‘Supermassive Black Hole’ and ‘Knights of Cydonia’ amongst others. The audience will uncover never-before-seen special effects, which ensures the ultimate audio / visual sensory experience. Alongside the eye-catching effects, the film allows Muse fans to get a closer look into the band’s creative concept, which includes the show’s highlights such as autonomous Drones flying across the audience, giant projections and LED laser works, which leaves the fans wanting more.

This exclusive event will also include the release of the bands new single,’Something Human’, soon after.