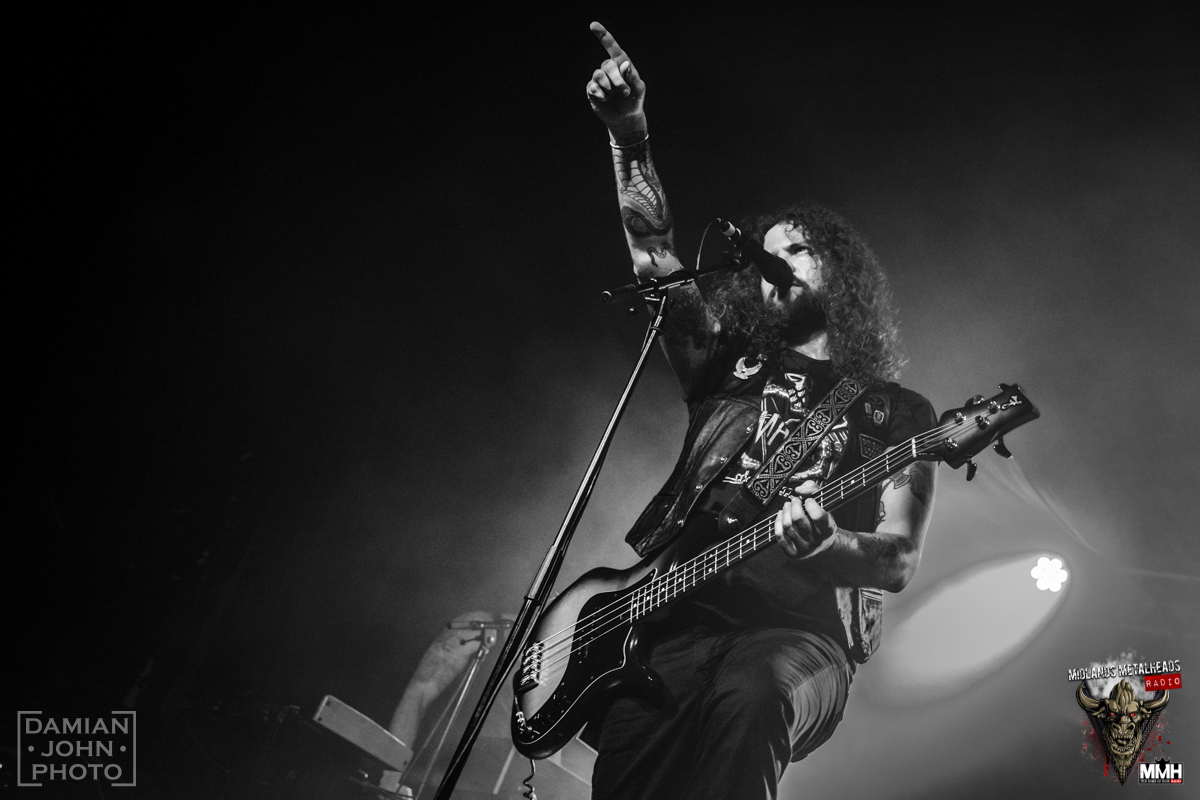 Filing into two separate queues outside the O2 Academy is a range of metal and rock fans. Some seek testosterone and true metal elitism from Manowar whilst the remaining prefer a night of raw Canadian rock n roll. And there’s a hell of a lot of people wanting the latter. Despite Monster Truck and support act Royal Tusk playing the smaller Academy 2, the venue rapidly becomes rammed to the point of having to squeeze through the crowd with the typical British awkwardness of apologising for every move.

Royal Tusk grace the stage with young enthusiasm, a band that have recently broke through with their 2018 release Tusk II. With their metal edge juxtaposed with gentle melodies, the band still retain their indie origins but with a refined heavier edge. At the very least, it’s refreshing to see a support act that differs in sound from the main event. Yet Royal Tusk go beyond this as they perform with every inch of style paired with consistent high energy throughout. With tracks like Stowaway blending an infectiously catchy rock n roll riff with a wider metal sound, it would be very surprising if they didn’t manage to gather a new selection of fans from their performance. Even with a fight breaking out in the audience that caused the band to leave the stage, they returned to “bring the party back” to great applause through their excellent cover of Cochise by Audioslave. This professionalism combined with the sheer passion for playing live music will surely put them in good stead for the future.

With the front portion of the crowd suitably crammed like sardines, the anticipation for Monster Truck is high. The audience practically erupts when the band saunters onto the stage, intensified further by the ferocious opening of The Lion. The audience seemed to melt into a sea of figures either jumping up and down or propelling their heads back and forth. Monster Truck had barely begun and already they’d proved who they are, what they do and made one hell of an impact in the process.

Don’t Tell Me How to Live immediately follows, a defiant song against anyone who tries to change or criticise an individual’s lifestyle. Although the song may come from a single perspective, the audience were completely united in the chorus, echoing the words back to the band in a surge of pride for their own identity.

Sometimes when a band plays and the singer lets the crowd sing, it’s barely audible. And awkwardly so. Yet tonight, throughout Monster Trucks set, the audience sounds huge. One full chorus singing along together which never fails to ignite a grin of disbelief and joy from frontman Jon Harvey.

A couple of songs into the set and guitarist Jeremy Widerman grasps the microphone, announcing to the audience that although he feels guilty, there’s no doubt that the crowd is better than any of the ones in their home country run of Canada. This is met with uproarious applause, just to prove the point that little bit further.

The setlist predominately features material from Sittin’ Heavy with a healthy dose of older tracks from Furiosity as well as Seven Sea Blues making a welcome appearance from The Brown EP. However, songs from True Rockers blends in perfectly despite a slight shift in style. Arguably one of the best live songs from the latest album is Devil Don’t Care, practically oozing in bluesy swagger from the melody to the riffs. Some of the more commercial sounding songs such as Evolution still thankfully possess the raw and organic energy that Monster Truck are known for when performed live.

Despite songs fuelled by adrenaline, Monster Truck also have the ability to take things down a notch and truly embrace the soulful nature that blues offers. This is performed beautifully with For the Sun, a shining example of Jon Harvey’s rich and varied vocal abilities that seem to encapsulate a new breed of power that differs from other tracks.

There is nothing but pure blissful happiness and passion for live music throughout the set. It’s a truly wonderful atmosphere to be in and one that Monster Truck naturally deliver, whether its through the southern rock comradery of For the People or the melodic stomper of Sweet Mountain River. What makes a significant difference is the energy that they feed from the crowd. Tonight, is a night where the band and audience are truly united as one. There’s no artificial pretences, no playing through the motions from the band. Everyone is connected in that brief moment, whether it’s through singing, dancing, headbanging or a simple nod of the head.

A first-class example of what live music can achieve.

Photography by Damian John, full gallery of Monster Truck and Royal Tusk can be found here