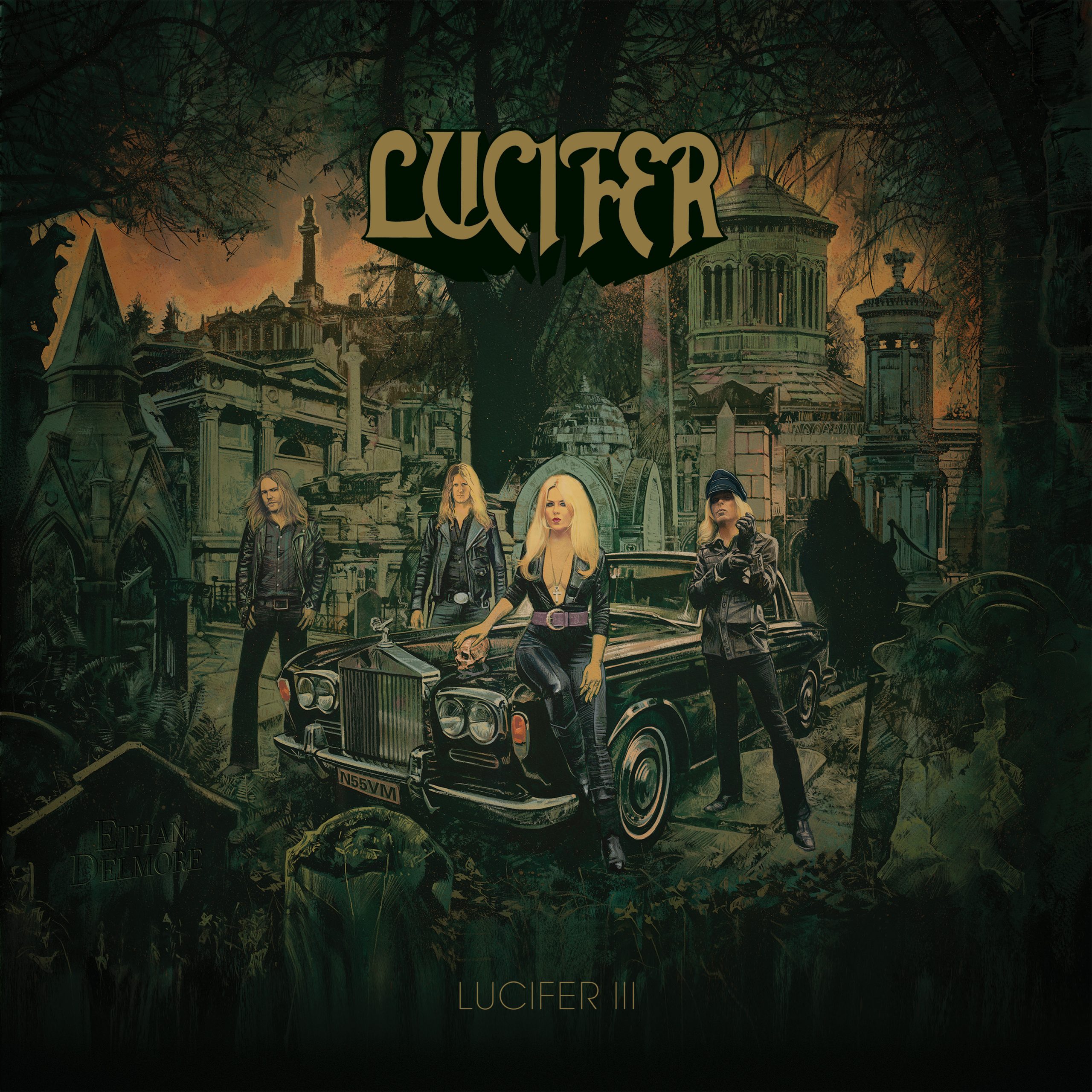 I first heard Lucifer a couple of years ago in the run-up to their second release, which as you could probably guess, was titled Lucifer II. Lucifer II was a step up from the heavier Lucifer I in terms of songwriting quality and memorability, allowing Lucifer to really ‘find their sound’ a bit more with a mix of old-school doom and 70s rock. With the epic ‘Dreamer’, doomy ‘Faux Pharaoh’ and punchy ‘California Son’, it was one of my albums of 2018. But that’s old news now – what does Lucifer III say about the band’s trajectory? Before we examine any of that, for the uninitiated, Lucifer are a doomy occult rock quintet fronted by the powerful and charismatic voice of Johanna Sadonis, the only constant member since the band’s inception six years ago. Sadonis, the German singer, is joined by four Swedish instrumentalists (including Nicke Andersson, known for his work with Entombed) to produce a sound that finds itself somewhere between Black Sabbath and Fleetwood Mac. Unapologetically retro and analogue, if you like your 70s-style heavy music, you should already be listening to this band!

Lucifer kick off their third offering with ‘Ghosts’. It’s upbeat, but with elements of their trademark darkness woven in. ‘Midnight Phantom’ is subsequently darker and indeed stronger, siding more towards a Sabbathy proto-doom style, even with a chiming bell thrown in for good measure. I have always preferred this side of Lucifer, and ‘Midnight Phantom’ is a brilliant example of how they have refined and bettered this sound over time. There’s also wonderfully layered vocal harmonies in the chorus to add a little bit of shade. ‘Leather Demon’ allows Johanna to croon over gently plucked chords as it fades in, proving one of her strongest ever vocal performances. The instrumentals are well written, giving off a real chill of darkness ‘between the lines’, without it ever straying from the 70s-style sound that Lucifer have. One of the riffs just before the solo could have been a lost take from Iommi himself from around Sabbath’s mid-period with Ozzy, sounding as depraved and foreboding as any of his classic licks.

‘Lucifer’ follows, with a more upbeat vibe. I find it better than ‘Ghosts’, which is stylistically similar, but the melodies and harmonies are simply more convincing and catchy in this number. The lyrics are brilliant, seemingly like Sabbath’s ‘NIB’ from another perspective. I guess that adds Lucifer to the list of bands with a song named after themselves, putting them in good company with Bad Company, Motörhead, Maiden, and of course Sabbath. ‘Pacific Blues’ has a brilliant Sweet Leaf-style stoner beat over it. Without a doubt, it’s one of the better songs on Lucifer III, with a catchy chorus, infectious twin-guitar leads and an irresistible, head-nodding groove. I can only imagine how this song is going to go off live under more normal touring circumstances! Towards the latter end of the disc, ‘Flanked by Snakes’ is a toe-tapping highlight, as well as the epic, slow-burning ‘Cemetery Eyes’. Johanna delivers the song as if she were telling a tale, and even if you don’t pay attention to the lyrics, as I tend not to when listening to music, it’s a gripping one at that. Rounded off with guitar leads, it’s a fitting finale.

It’s certainly a good album, but with that said, I can’t help but feel something is missing, or lacking. Compared to their previous albums, the songs are noticeably shorter in length, and it’s not as if their older work feels bloated, either. ‘Cemetery Eyes’ is the longest song on the album, just shy of six minutes, and as good as it is, I can’t help but feel that they could have done more with it to really hit home. It just doesn’t share the same ambition as their first two albums. Despite this, and the slightly weaker second half, the high points on this album completely speak for themselves – tracks 2 through to 5 are absolutely golden and I can’t discredit Lucifer for this. The album is well produced, with an incredible guitar tone that sounds extremely close to the heavy 70s bands that Lucifer are emulating. They do well to mix up slower songs that plod away with the more uptempo tunes, to stop the listener drifting off. Good work all round.