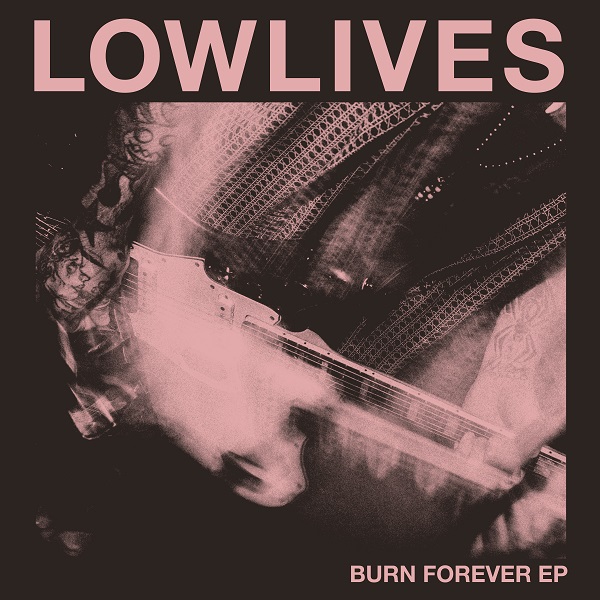 Burn Forever is the debut EP from the diverse conglomerate that is Lowlives. You would be hard pressed to find a group with a larger range of backgrounds, at least while keeping within rock and metal circles anyway. There is frontman and guitarist Lee Villain (The Defiled), drummer Luke Johnson (No Devotion), bassist Steve Lucarelli (The Ataris) and guitarist Jaxon Moore completes the line-up. Lee Villain stated last year that the band intends to be ‘free and agnostic of the boundaries that define popular music genres’. Given that, between all the band members’ previous work, they have covered everything from electronic industrial metal to indie rock and pop-punk, they have enough influences between them to achieve such a bold claim. However, talk is one thing: the proof of the pudding, as they say, is in the eating.

The title track and single, Burn Forever, is first up. With a straightforward song structure, simple yet energetic instrumentation and melodic chorus, it sits somewhere between modern hard rock and punk. The opening riff doesn’t really stand out from any other current hard rock band, but the heavily noisy guitar tone makes everything sound a lot harsher and gives it a rawer edge. Noisy really is the best description for the guitar work: aside from the aggressively strummed chords that form the melodic backbone, the track is also littered with guitar feedback, harmonics and other undefinable sounds. When combined with the slightly distorted edge in Villain’s voice, you get much more of a punk vibe from the song. Black Hole has a similar attitude, very much from the all-you-need-is-three-chords school of song writing. Unfortunately, the four-minute track just goes by without doing anything that Burn Forever didn’t do better, other than the more ambitious lyrical theme about the enigma that is space.

Not that the EP peaked early, far from it in fact. It is the third track, Thieves, that is the real highlight. The discordant and aggressive guitar line leads into a verse with vocals that will please any fans of The Defiled: static-soaked screaming at its finest. The variation in the vocal delivery is really what makes this one stand out, going from full-out screams to a melodic build up that brings in the final hook ridden chorus of the EP. I am always enthralled when aggression and melody are combined well, yet am often disappointed as some bands write a mosh-pit ready verse and a hook laden chorus with little thought as to how they flow together. Thieves uses a classic vocal bridge to solve this problem, which is hardly re-writing the rulebook, but that doesn’t mean it is undeserving of merit. In this case it works in a very enticing manner. To give your eardrums some relief, the final track is an acoustic version of Burn Forever. This is awkward territory, as I am very much of the opinion that acoustic versions of songs should only be done if they re-imagine the track, bringing something new that the original did not. In this case, the attitude and energy of the original is exchanged for the barren and desolate sound of Villain and an acoustic guitar, bringing a sense of hopelessness and forlornness, ending things on a surprisingly sombre note.

Burn Forever is energetic and engaging, full of hooks and rhythms that are bound to go down well live and are easily accessible. Saying that, there are a plethora of new bands that could fit that description, most of which are also within the hard-rock category. Have Lowlives raised themselves above traditional genre tropes? I don’t think so. The punk rock attitude, and of course Villain’s unique voice, does go some way to helping them stand out, but there is very little that hasn’t been done before. I am only focusing on Lowlives’ ‘uniqueness’ because of the statements given by the band. In reality it is impossible for every band to sound completely unique. Even if two bands sound similar, that needn’t detract from the enjoyment of either. So, if you ignore the bands bold opening claim and just take this EP as it is, 15 minutes of highly enjoyable, rough-around-the-edges hard rock, then you should have a good time with it.

Burn Forever is released on September 21st 2018 and can be ordered here.