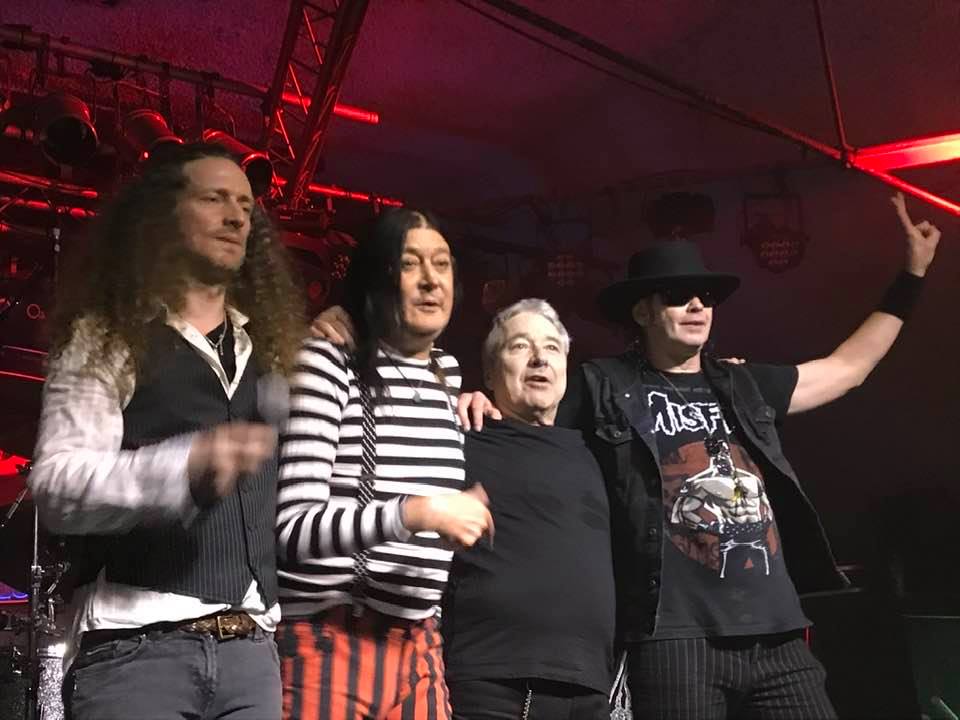 A visit up to The Robin 2 in Bilston to watch a rock and roll icon, what better way (No Pun Intended) to spend an otherwise miserable January night. It was good to catch up with a couple of mates beforehand as well. Not many in early on, but Aston Villa had an important cup tie, so that explained it.

A last minute change to the scheduled bill, local lads CANIS were the curtain raisers tonight. A trio from the Wolverhampton area, who are fairly new on the scene. ‘Silhouette’ and ‘Light’ are the starters, original numbers that have a stack full of pounding, care of drummer Jack Fabian and well executed vocals from Matt ‘Brg’ Stanford’, there are some long instrumental passages too, that make a refreshing change. ‘Circus’ has more vocal content, but there is space for bassist Nikolas Lakatos to dish out some thumping lines. Even on a large stage and in front of a meagre audience, Canis hold their own and ‘Up From Here’ is a really well written number. The Scorpions ‘Rock You Like A Hurricane’ gives us a chance to judge the band with a familiar song, yes, it’s a good cover. More original work with ‘Funki’, ’Stay Strong’ and ‘Prick’, varying styles but all pretty impressive. They end on another cover with Lynyrd Skynyrd’s ‘Sweet Home Alabama’. A very promising young band, full of talent and they pen some decent songs.

Mr Pete Way takes to the stage, still wearing the trademark Red & Black striped jeans. He is flanked by Jason Poole on bass & mandolin and Tym Scopes on guitar/slide guitar and of course UFO drummer Clive Edwards at the rear, to complete THE PETE WAY BAND. Pete is a living legend to be fair, having a reputation in the rock world, as one who has been there and done it all, many times over. He has also survived heart attacks, prostate cancer and numerous problems relating to years of drug and alcohol abuse, besides suffering personal loss and tragedies. So what are we expecting tonight, we all know Pete is singing and not on bass, we know he still isn’t in the best of health and we are well aware he’s not getting any younger. The result of life as a wild rock and roll star is standing before us and despite it all, he’s still up there, ready to give it his best.

Playing bass with UFO for over 30 years and teaming up with Ozzy on occasion, the much adored Pete also had success with Waysted, Fastway and MSG. He has also produced work by bands such as Twisted Sister. The opening song is ‘You And Me’ from the album The Plot, a collaboration with Michael Schenker back in 2004. ’Shoot,Shoot’ is the first UFO track we hear and this is interlaced with more of The Plot numbers and a couple from the solo Amphetamine album, being ‘Fooled Again’ and ‘Crazy’. ‘Might As Well Go Drinking Tonight’ is a right swagger. Scopes is an incredible guitar wizard and handles hugs from Pete while still managing some serious slide. 2020 should see the release of a new album, Walking On The Edge, we get a brace from this with ‘Narcotics’, a light hearted song about going to rehab, this features Slash on the recorded version and the tearjerking ballad ‘Heartache’.

Admittedly, it’s far from perfect as it is difficult to make out what Pete is muttering sometimes between songs, but that’s the reality and it’s the awkwardness, unplanned and ad libs, that makes it so entertaining. The final leg, sees three UFO classics, ’Too Hot To Handle’, ‘Only You Can Rock Me’ and ‘Doctor, Doctor’ and these are performed with a little more togetherness and ends the main set on a high. With time to play one more, there’s a cover of The Velvet Underground classic White Light/White Heat’ which is a perfect choice to finish on.

Again this is pure rock and roll and a demonstration of how some would say it should be played. The uncertainty and risk adds to the experience and is the reason we turn up to watch the likes of Pete Way, long may he continue. He signed my copy of his autobiography afterwards, ‘A Fast Ride Out Of Here’, it’s a brilliant read, I do recommend it.

Thanks to Brett Hall