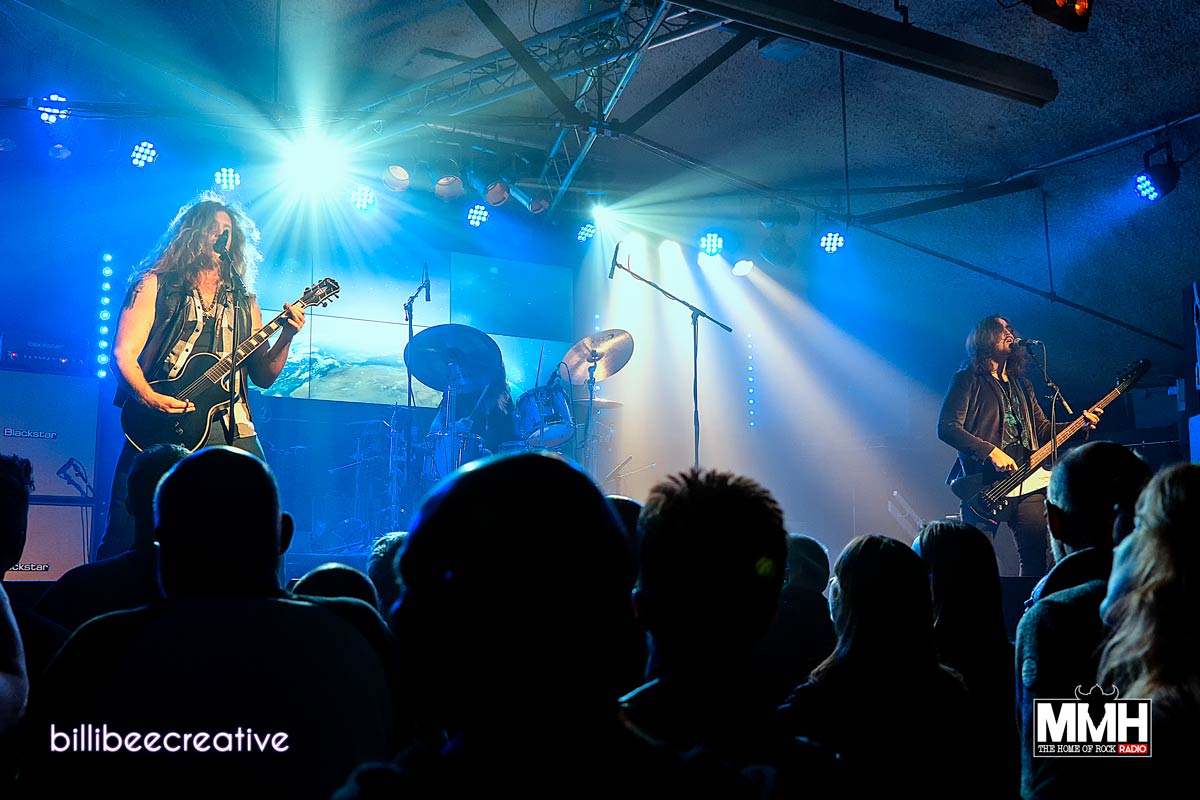 My first visit to the Craufurd Arms in Milton Keynes tonight and this is due to me bottling the journey last Tuesday to Bilston. The floods, sleet and snow just defeated me. So being the conscientious person that I am, I had to make up for missing that gig. Well, first impressions of the Craufurd are wow, proper rock orientated boozer. The decor is fantastic, lots of painted walls depicting colourful skulls and ghouls and there is a mass of memorabilia around the bar. I particularly loved the ‘stained glass’ windows with Lemmy, Bowie, Kurt and Jim Morrison, in religious settings. So with a glass of beer in hand, I proceed to investigate the actual venue out back, it’s a good size room probably holds about 300 and although there isn’t a bar, it’s not far to walk back into the pub area.

KIAN RUSSELL is remarkably young, no more than 17 years old and already endorsed with Blackstar Amplifiers. Full of charisma, I think it’s that boyish smile that wins me over from the start, as he starts to lay waste on the Craufurd Arms stage. It’s the last night of the Kian Russell band, from now on they will gig as The Black Doors. Alongside Kian is Leia, who works her socks off on drums, Oli who provides a subtle and strong bass and James also on guitar. Harley is on backing vocals, but to be honest I couldn’t hear her that well. Guess as it’s the first time they have played together, it’s a bit daunting standing in front of a packed room. Nevertheless, Kian has had some experience and this does shine through as we hear tracks from the EP ‘Off The Ground’. Influenced by Stevie Ray Vaughan, Albert King and Jimi Hendrix, it is encouraging to witness a new generation emerging and playing Blues Rock guitar so effortlessly and having so much confidence, he even uses a drumstick to strum with at one point. The Les Paul is handled masterfully and original songs ‘Laura’, ‘Bullet Through The Heart’ and Take You Pick’ demonstrate why this Northampton based guitarist is causing such a stir.

I first saw COLLATERAL at the Breaking Bands festival last year, they were fresh, energetic and impressive. The cowboy boots, long unkempt hair, ragged denim and easy going rock ballads, won us over. After a gig in Cannock recently, I began to wonder if they had levelled out and lost some of their drive. However, fear not, tonight they prove me wrong, the gruelling schedule they have set themselves in the last few months, has worked positively, in both helping them grow stronger and even more focused. Angelo Tristan on vocals and guitar, is at ease, he controls the performance and handles the crowd perfectly, who strangely were a bit slow off the mark tonight. However, after a few songs and some encouragement from bassist Jack Bentley Smith, the punters, who probably haven’t seen Collateral before, are soon clapping along. Todd Winger continues to stun us with guitar solos and Ben Atkinson on drums completes the line up. All the set is from the new self titled album, which is already being hailed as one of the best of the year. ‘Mr Big Shot’, Merry Ground’, ‘Midnight Queen’ and the closing ‘Lullaby’ are now embedded in the fans hearts and there are plenty in the Craufurd tonight. They continue to tour and have dates around Europe in the coming months. Fast becoming one of the favourite bands on the road, Collateral continue to grow, shine and capture our admiration.

JARED JAMES NICHOLS takes to the stage, amid the smoke bellowing out, he looks like a young Ted Nugent. With long curling locks and a leather waistcoat, he grins at us, showing off his perfect white teeth. Armed with a battered Epiphone guitar, he then begins to charm us with his guitar wizardry. I am sure like me, many of you have seen numerous Blues guitarists and while very often you stand in amazement, you can often feel drained and tend to drift into another world mid set. Self indulgence and lengthy solos, are not for everybody. So when you think you have seen it all, along comes JJN, Blues yes, but in a more awakening and aggressive style. I have never seen anyone play without a pick in the manner that this dude from Wisconsin does. From the tender age of 14, Jared had a guitar in his hand 12 hours a day, practising and learning from the old blues players he saw around him. After getting up and jamming with Buddy Guy, by the time he was 21 he had knocked up over 500 shows, this man is incredible.

Most of the first numbers are from the 2017 album ‘Black Magic’, being, Last Chance’, Don’t be Scared’ and ‘End Of Time’. Hugging the six strings, detuning mid song and letting the notes hang, all combine to make the sound unique. Bending the strings on the fret and holding his other weapon, a vintage 1953 Les Paul, vertically while playing one handed, just has to be seen to be believed. Suddenly there is a wilder atmosphere, we hear the new single ‘Throw Me To The Wolves’ and you realise Jared can sing pretty sweet as well. ‘Honey Forgive Me’ drips with the nectar it portrays, a dark and smoother number, with loads of bass and drum from his band. A couple from the album ‘Old Glory And The Wild Revival’ and we slip into a Southern Rock vibe, reminding me of Pat Travers and Lynyrd Skynyrd. ‘Baby Can You Feel It’ and ‘Now Or Never’ reveal more unbelievable strokes, while ’The Gun’ reminds me of that  Coverdale/Hughes era of Deep Purple, it has that kind of slow and pounding rhythm.

Then it is all about youth again, as we see 15 year old Toby Lee appear on stage to duet with Jared, they cover ‘Smokin Gun’ and as with Kian earlier, it’s great to see youngsters playing the Blues so well and with no qualms. The show continues with plenty of slide guitar and messing about with a few chords of favourite  tunes, the ‘Pink Panther’ theme, amongst others. The virtuoso hits us with ‘Playin For Keeps’ before ending on a cover of Mountains ‘Mississippi Queen’. Then he leaves us, crying for more.

‘I was blown away’, is often used to describe the feeling after a fantastic gig, tonight if there had been the slightest breeze, I would have ended up in the clouds.