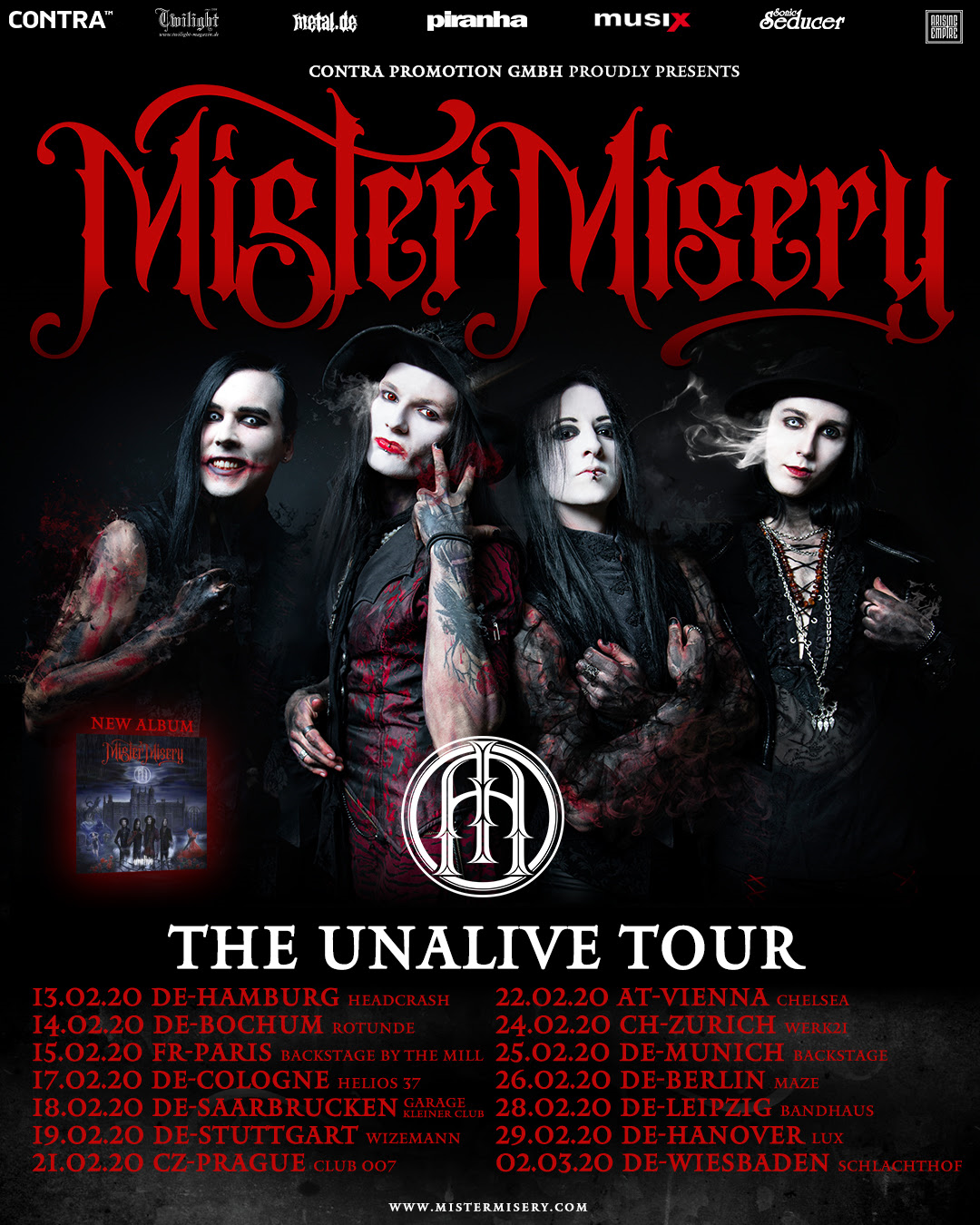 Sonic Seducer – “They’re going to take the scene by storm with “Unalive”.”

ORKUS! Magazine – “Every track of “Unalive” will haunt your head for a long time to come! Newcomer of the month!”

All about the Rock UK – “I think Mister Misery, if the forces of evil are on their side, will sink their teeth into the bloody prize they so seek.”

Legacy – “The melodies are carving their way unstoppably into the auditive ear tunnels and so there is one hit following the other. That’s what entertainment on a top-notch level looks and sounds like!”

Rock Portaal – “Once in a while a composition comes along that immediately grabs you. That happened to me in recent months with ‘My Ghost’ by Mister Misery. Is it the melody? Or the tempo? It’s a bit indescribable why ‘My Ghost’ made such an impression on me, but fact is, I can’t get enough of it. Musically you can feel the influence of eighties rock. A bit of Joan Jett and a bit of Def Leppard, but mega-strong. Mister Misery released one of the best debutalbums this year.”

Hardline – “This is how I actually imagine a newcomer band in 2019.”

AARDSCHOK”A super energetic album filled with very catchy, steaming songs that I won’t be able to get out of my system in the coming months.” –

Rock Hard IT – “Here comes the new alternative metal sensation from Sweden! Horror and theatrical melodies in a mix between early Avenged Sevenfold and Wednesday 13.”

METAL HAMMER – “A killer gothic circus show performing a soundtrack between Metalcore and Visual Kei. This mixture has never been heard or seen before!”

Today MISTER MISERY from Stockholm, Sweden released their first-ever full-length record ‘Unalive’! To celebrate ‘Unalive’ the band released the music video for ‘Alive’ and announced their own headline tour for 2020!

MISTER MISERY: “We are so excited to finally release ‘Unalive’ to the world. It has been such a crazy ride since the beginning of this year and we are eternally grateful for this amazing opportunity that has been given to us! We have worked so hard to make this happen and it would not have been possible without the amazing support from our fans and our labels Arising Empire & Contra Promotion.
This has been a dream of ours since we were kids and to see our band take shape in such a rapid pace is unbelievably amazing to us.
From the bottom of our hearts, thank you! We’re gonna keep doing this for many, many years to come! We hope that you enjoy our latest music video ‘Alive’ and blast our debut album ‘Unalive’ til your neighbours lose their minds.
Last but not least, we are maniacally excited to tell you that we are going on a headline tour in February called ‘The Unalive Tour’ and can’t wait to start next year with our second, headline tour!

Much love from all of us in Mister Misery,
Harley, Alex, Rizzy & Eddie”

Markus Staiger (CEO Arising Empire): “Mister Misery from Sweden soon come up with their amazing debut album which could be described as a mixture of glam rock, metal and a touch of gothic! Marilyn Manson fans as well as all other heavy rockers should watch out and check the first clip ‘My Ghost’ – a phenomenal video production by Patric Ullaeus (The 69 Eyes, Dimmu Borgir, Within Temptation, Arch Enemy, etc) This young band from Stockholm will kill it, it has been a long time ago where I was so excited about a brand-new band!”

Contra Promotion: “We are very happy to welcome such a talented new metal band as Mister Misery to our artist roster. The voice, combined with the songwriting and look of the band make Mister Misery an act with a very high, unique identity, which sets them apart from other acts in the genre. This convinced us to work with Mister Misery and we are sure that this band has an eventful future ahead of them.“

MISTER MISERY will support BEYOND THE BLACK on their big European tour 2019 in October/November!

MISTER MISERY is a four-piece metal band from the streets of Stockholm, founded in February 2018 by Harley Vendetta & Alex Nine. By blending high energy riffs with anthemic choruses and ripping guitar solos, they have managed to not only to create hype within the underground metal community, but also caught the attention of renowned founder of Nuclear Blast/Arising Empire, Markus Staiger, leading the band to sign a record deal with Arising Empire in 2019. In addition, MISTER MISERY has also signed with booking company Contra Promotion, housing bands such as NIGHTWISH, ANTHRAX, THE 69 EYES and many more.

Their brand new debut record ‘Unalive’ reflects the emotions and struggles of a journey taken by the four members, including death, jail time, abandonment, drugs and poverty. Through every individual experience they’ve managed to turn that misery into something inspiring, and with that inspiration managed to pull themselves up from the dirt and give life to what they now call MISTER MISERY.
The album title itself is inspired by their undead, vampiric look, depicting visually what it felt like for them to be metaphorically dead on the inside.

In collaboration with Arising Empire and Contra Promotions, MISTER MISERY will kick-start their career and promote their debut album ‘Unalive’ worldwide on October 4th 2019.

The future looks bright for these young metalheads and with a European tour starting October 10th to November 3rd they will end their most successful year so far.

“This would not have been possible if Markus Staiger and the amazing team at Arising Empire and Contra Promotions had not believed in the band as much as they have. We are all very humbled and excited to start this journey together with the Arising family and all these talented people around us”- says Harley, Alex, Eddie & Rizzy

With ‘Unalive’, MISTER MISERY shows their musical talent and showmanship right from the start of the journey, not holding back on anything. With their catchy choruses, insane writing and guitar composition, with elements from every musical genre known to man, they are starved for stardom and to show the world how metal and rock is still alive and kicking in the 21st century.