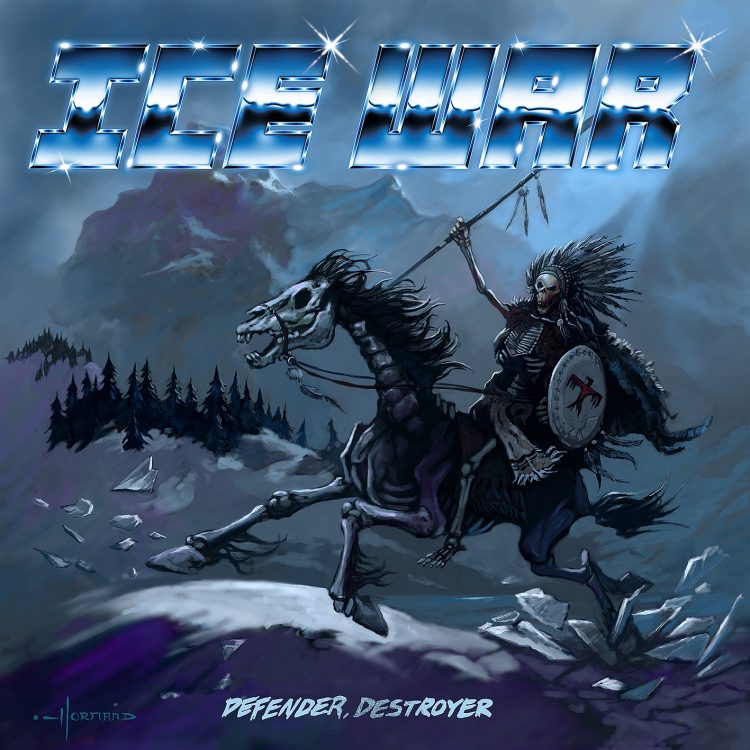 Shortly after disbanding from his previous band Iron Dogs in 2015, Jo “Steel” Capitalicide formed the one-man project of Ice War to fuel his bubbling creativity. Ice War fully embraced the old school approach through the release of cassette tapes and singles and is still an integral part of the underground Canadian metal scene to this day.

Flash forward to 2020 and Ice War are set to release their largely anticipated fourth album Defender, Destroyer. The album artwork itself (painted by famous fantasy illustrator Didier Normand) is enough to inform the listener of what kind of sonic trip they’re in for. Battle like depictions of the undead coupled with an aggressive frosty colour palette is very much the personification of Ice War’s namesake. This aggression blends into their sound as Defender Destroyer marks Capitalicide exaggerating Ice War’s musical aesthetic to one of complete hostility and speed. Capitalicide himself is very much one for exploring different genres, whether its synthwave remixes of songs, weekly punk covers or being the frontman of death metal side project Expunged. Punk and metal is the key to Ice War as Defender, Destroyer embodies old school speed metal blended with that spitting snarling edge of punk.

Opening track Power from Within begins with tribal drum beats and a melodic Maiden style riff. This transitions into a chug whilst the lead guitar is simply revitalised through that fiery solo layering the charging rhythm. The vocals possess that trademark punk aggression and attitude whilst the music acts as a time machine, propelling the listener back to the time where the NWOBHM ruled the scene.

Title track Defender, Destroyer hurtles forward in a take no prisoners approach and boy is it exhilaratingly fast. It reminds me of Slayer’s debut album Show No Mercy as the track showcases that rustic and gritty display of pure aggression and speed. Especially with that adolescent Tom Araya scream at the beginning. The chorus reiterates the line “smash the gates of hell” until it’s lodged firmly in your psyche. The music itself encapsulates the chorus by being a sonic version of a battering ram that would disintegrate any entrance to Satan’s fire infested abode. When you focus on all the instruments hammering away at sheer velocity, the guitars chugging and shredding with the double bass of the drums pounding, its impressive to reflect how this is all Capitalicide’s work.

Soldiers of Frost is brought to life through punk riffs and chugging rhythms. The bass line is gloriously prominent, taking inspiration from Steve Harris’ galloping rhythms and injecting them with an overdose of amphetamines. The chorus chanting of “Soldiers of Frost” with various “woah oh oh ohs” is so intrinsically punk and ridiculously catchy. We all know that punk and metal is a harmonious blend (just look at Motorhead in their early days) but its fantastic to know that the hybrid is alive and kicking, new but thriving in the old school underground realm.

Rising from the tomb is another great speed metal track whilst Mountain of Skulls is slower and more atmospheric, again very early Maiden like especially with the Paul Di’Anno vocal tone.

The second half of the album is definitely weaker than the first as segments of the music and vocals stand out less and creep into repetitive territory. Yet the tracks are still solid and have some notable moments.

Crucified in Fire opens with another tribal drum beat and a solo over the top that could have easily been a Kill ‘Em All outtake. It then kicks into gear with a high pitch screech, chugging forth again into battle. The lyrical content of “wretched priest condemning you to burn” fuels the metal tropes of anti-religion and witchery connotations.

Demonoid begins with another blindingly fast riff, isolated and prolonged at first so the listener almost falls into a hypnotic trance. The chorus line of “look at yourself before you cast a stone on me.” reiterates that typical metal topic of being a victim of judgement by an individual that needs to accept and realises their own faults before casting such allegations against others. It’s a fair remark and very catchy in its simplicity.

Skull and Crossbones possesses a bassline chug and an infectious jolting riff. This paired with staccato riffs is so effective and reminiscent of machine gun fire. The deep rumble of the bassline is very cool and works well with the occasional growly edge of Capitalicide’s vocals.

After Running out of Time, Breakaway begins with a lighter version of a foreboding doom metal melody before it shifts into another classic chug. The one element you should take away from this review is that palm muted chugging is at the heart of Defender, Destroyer. Chorus lines of “breakaway, live another day” are simplistic and repetitive yet it’s the perfect recipe for a memorable chorus. The middle section concludes with tremolo solo notes wavering out and transitioning into a lower and darker palm muted chug before unleashing back into the chorus. It’s a small moment but one that’s very cool.

Albums and bands like Ice War assure you that the metal scene is still alive and kicking amongst the underground in various hemispheres. The first half of Defender, Destroyer is definitely stronger than the second but it’s still a fantastic effort overall. Repetitious sound is a double-edged sword after all as bands like AC/DC have milked many an album and songs from their bluesy hard rock formula to a wave of success and acclaim.

If you’re a fan of punk and old school speed metal with sprinklings of fantasy, Ice War and Defender, Destroyer is definitely worth checking out.

Ice War are a part of Fighter Records.