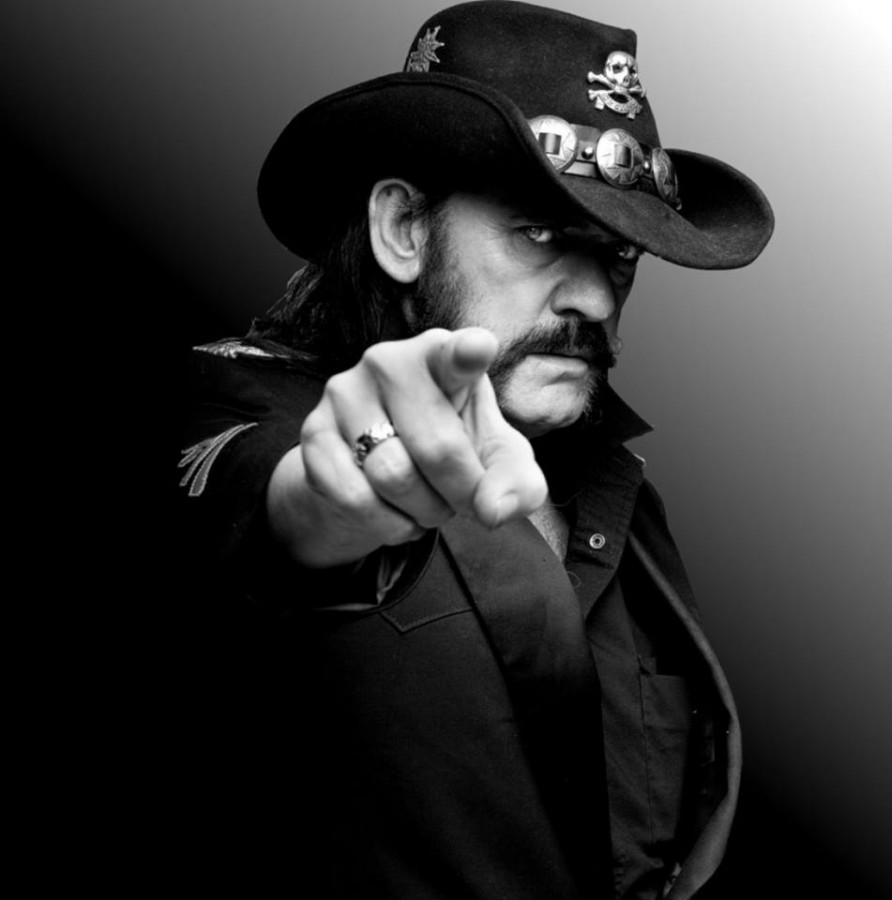 “Death is an inevitability, isn’t it? You become more aware of that when you get to my age. I don’t worry about it. I’m ready for it. When I go, I want to go doing what I do best. If I died tomorrow, I couldn’t complain. It’s been good.”

Born in Stoke on Trent on 24 December 1945. Lemmy is an English singer and bass guitarist most famous for being the founding member of the hard rock/speed metal band Motörhead. His appearance, facial moles, mutton chops (sideburn-moustache combination), and gravelly voice, have made him an instantly recognisable cult figure. Lemmy is considered one of the great heavy metal musicians.

“I don’t do regrets. Regrets are pointless. It’s too late for regrets. You’ve already done it, haven’t you? You’ve lived your life. No point wishing you could change it.”

In 1971, Lemmy joined the space rock band, Hawkwind, who were based in Ladbroke Grove,London. He had little experience as a bass guitarist, but quickly developed a distinctive style that was strongly shaped by his early experience as a rhythm guitarist, often using double stops and chords rather than the single notes preferred by most bassists. Lemmy’s bass work was a fundamental part of the Hawkwind sound during his tenure, perhaps best documented on SpaceRitual. He also provided lead vocals on a number of songs, including the band’s biggest UK chart single, “Silver Machine”, which reached No.3 in 1972.

In 1975 Lemmy was fired from Hawkwind after he was arrested at Canadian customs on possession charges; he spent five days in prison. Lemmy went on to form a new band with guitarist Larry Wallis (former member of the Pink Fairies, Steve Took’s Shagrat and UFO) and drummer Lucas Fox. Lemmy’s connection with Took (formerly of T Rex) was not limited to Wallis, as they were personal friends and Took was the stepfather to Lemmy’s son, Paul. This new band was originally called Bastard. When his manager informed him that a band by that name will never get a slot on “Top of the Pops”, Lemmy changed the band’s name to Motörhead – the title of the last song Lemmy wrote for Hawkwind.

Soon after, both Wallis and Fox were replaced with guitarist “Fast” Eddie Clarke and drummer Phil “Philthy Animal” Taylor, and with this line-up the band began to achieve success. The band’s sound appealed to both Lemmy’s original heavy metal fans, as well as to fans of the nascent punk rock scene. In fact, Lemmy asserts that he generally feels more kinship with punks than with heavy metal; he even played with The Damned for a handful of gigs when they had no regular bassist — and Lemmy’s guttural vocals were unique in the world of rock at that time. The band’s success peaked between 1980 and 1981 with a number of UK chart hits, including the classic single “Ace of Spades” (still a crowd favourite today) and the #1 live album No Sleep ’til Hammersmith. Motörhead have since gone on to become one of the most influential bands in the heavy metal music genre, and although Lemmy is the only constant member, are still performing and releasing records to this day. Despite Motörhead’s many member changes over their 30 year history, the current lineup of Lemmy, Phil Campbell and Mikkey Dee has remained constant since 1995.

Lemmy has also worked with a number of other musicians over his career, and occasionally guests with Hawkwind. He was brought in as a songwriter for Ozzy Osbourne’s 1991 No More Tears album, providing lyrics for the tracks “Hellraiser”, (which Motörhead later released on their “Hellraiser” single) “Desire”, “I Don’t Want to Change the World”, and the massive hit “Mama I’m Coming Home”. Lemmy has noted in several magazine and television interviews that he made more money from the royalties of that one song than he had in his entire time with Motörhead. Lemmy published his autobiography, White Line Fever in November 2002. In 2005 Motörhead won their first Grammy, beating out such modern contemporaries like Slipknot, Killswitch Engage, Hatebreed, and Cradle of Filth, in the Best Metal Performance category with their cover of Metallica’s “Whiplash”