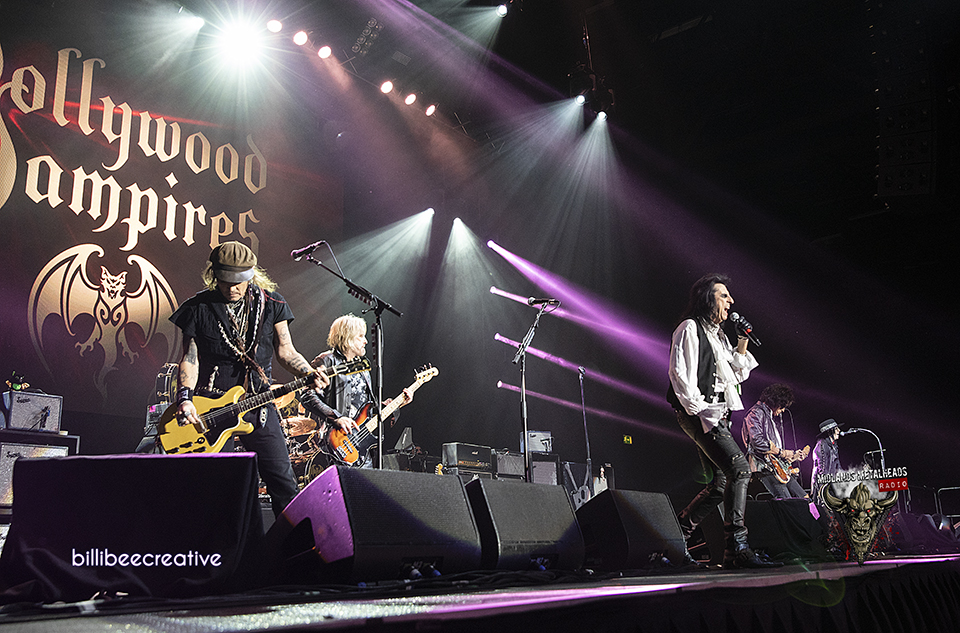 The Hollywood Vampires / The Darkness / The Damned

Due to an incident on the line which cancelled my train I sadly missed The Damned, which is a shame as I have heard great things about them.

I last saw The Darkness when they were an unknown entity supporting Def Leppard back in 2003 I believe. I was front row and left somewhat bewildered as a sprightly spandex leotard clad Justin Hawkins came flailing towards me hailing ‘I Believe In A Thing Called Love’. I came away that night wondering if they were for real or some kind of Spinal Tap/Bad News reincarnation. Years later I have my answer as tonight they command the Genting Arena stage as bonafide rockstars as they strut through their many hits, ‘Growing On Me’, ‘Love is Only A Feeling’ and ‘One Way Ticket’.

Justin thanks the crowd for coming to see Hollywood Vampires and enduring The Darkness and tells us Frankie Poullain is apparently now Johnny Depp’s new life guru. Justin is a born entertainer and belongs on an arena stage, which is fortunate as those outfits would just look daft in a pub.

We are treated to a raucious ‘Get Your Hands Off My Woman’ before more off the cuff stand up, likening our dulcet Brummie voices to “old unwanted curdled scabby old milk”, I can’t say he’s wrong though! A perfect warm up act for tonight’s heavyweights, the crowd are eating out of Justin’s hand with ease. They leave us with a bang closing on  ‘A Thing Called Love’ which you’ll be humming all the way home whether you like it or not.

I thought of countless opening gambits but nothing else quite conveys the enormity of what’s just happened here! If my ‘F’ words offend please go check out the Hollywood Vampires collective past then come back, now I seem like Tinkerbell right!

This super-group of legends in their own right, get straight down to business with ‘I Want My Now and ‘Let’s Raise The Dead’ as we all take a moment to believe what we are seeing and drink in the vibe as we drift back to the dark smoky Hollywood dens of yesteryear where the original Vampires drinking club was born.

Alice tells us “we are the Vampires, we play songs for all our dead drunk friends”, as they launch into ‘Got a Line On You’, ‘7 and 7 Is’ and their anthem ‘Dead Drunk Friends’, written about The Rainbow and played to a haunting backdrop of the likes of Lemmy, Hendrix et al.. We are then transported back to 1968, when Alice tells us he met The Doors, performing ‘Five to One/Break on Through’  to a backdrop of Jim Morrison images. Next up Alice reminds us “we just lost Malcolm” and pays tribute with ‘The Jack’. It feels like Alice could actually invoke the spirits to join us at any moment.

It’s no surprise to see Johnny is a natural up there on stage, understated, low slung rhythm guitar, throwing shapes like the best of them, no better actually! It’s fair to say you won’t feel amazed by his technical guitar skills and I imagine if a little claw came down, lifted him up and threw him out like in a stuffed toy machine, I dare say nobody would hear the difference, and Joe fucking Perry is there after all, as well as third guitarist Tommy Henriksen, but Johnny has paid his dues elsewhere so let’s give him this with open arms and enjoy it! I’ve got to say, every other gig I witness from this day forward will be that little bit poorer for not having Johnny Depp stage left!

‘Ace of Spades’ brings the house down accompanied by Lemmy on the video screen, tugging at our little black heartstrings, I don’t think we will ever get used to the fact that Lemmy is no longer here and you can really feel the essence of what the Hollywood Vampires represent. A tip of the hat to Keith Moon with ‘Baba O’Riley’ before Glen Sobel’s short drum solo is followed by a new Depp penned song about his father, a criminal, ‘As Bad As I Am’, and another original ‘Boogeyman Suprise’ whetting our appetite for the next record.

Alice rips into ‘I’m Eighteen’ reminding us of his own legendary status, as if we need reminding, the way he commands us with his cane, the evil ringmaster. Then the pace slows for some welcome Joe Perry blues ‘Stop Messin Around’.

Johnny takes a little blues solo and I don’t even care at this point that blues solos are relatively easy, he rocks it and we are all loving him for it, effortlessly oozing coolness, flipping picks into a crowd that treat them like golden tickets. He then shows us he can sing a little for ‘People Who Died’. We are given another new song ‘Bushwhackers’, a song inspired by Johnny getting into a little trouble in a club, before Johnny really has his shining moment, taking lead vocals for Bowie’s ‘Heroes’, I look around and see a lot of pleasantly surprised people giving the thumbs up, he’s really alright up there!

Local hero Ian Hunter joins in for ‘All The Young Dudes’ and the night draws to an end with ‘Train Kept a Rollin’, a roof raising ‘Schools Out’ and ‘Another Brick in the Wall’.

Living legend Alice bids us farewell “we are The Hollywood Vampires and we pay honour to all our dead drunk friends”.

Time to leave as ‘Anarchy in the UK’ rings out through the speakers, we all leave on a high knowing we witnessed a special little piece of rock n roll history tonight.