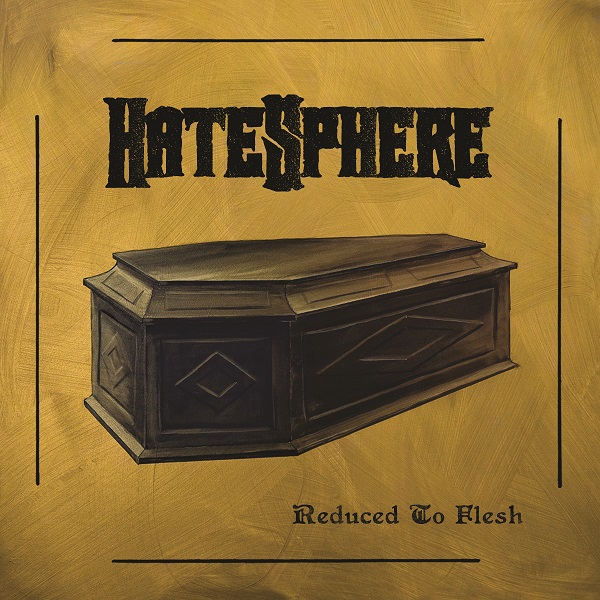 Denmark’s Hatesphere are a perseverant bunch. Under the stewardship of guitarist Pepe Hansen, the Danes have been plugging away under various guises since the ‘90s, with a steady stream of releases satiating the hunger of those who see Scandinavian neo-thrash as a staple of their musical diet. The group has seen its share of changes in the line-up (of which Hansen is the only original member), but as the creative keystone of the band, he has kept them close to their core sound. Reduced to Flesh is album number ten, and does little to stray far from the established norm.

Anyone familiar with the melodeath gone thrash gone groove movement that was popularised by the likes of The Haunted and the more economical releases from In Flames and Soilwork at the turn of the century will sit comfortably with Hatesphere. There are a few symphonic elements here and there on the album, but it largely derives much of its influence from the Gothenburg scene. Production wise, I’m still undecided on how I feel, with the guitar in particular coming under scrutiny. The tone is a little fuzzy (and not in that good, old school Swedeath way) that weakens the fast, cutting thrash sections; conversely, it gives the album a gritty sheen that has always worked well in the genre. The low end is a little light for my liking as well, dampening the impact of the relentless death metal bursts and easing the weight of the groovier riffs.

These snags are a minor detriment to the instrumental performances, but vocally, the issues are far more glaring. Esse Hansen’s voice is harsh yet discernible, and although he keeps things interesting by varying his delivery, it is bog standard stuff that is largely inferior to other acts in the style. Some of the more guttural grunts are pathetic (the end of “Nothing is Definite” for example), and he’s very hit and miss overall. I guess he’s representative of the album as a whole, as it’s a pretty messy affair, with scattershot songs that often lack focus. There’s probably something to like in every song, but a whole, a lot of them struggle to make the grade.

Reduced to Flesh isn’t a hopeless case though. The title track is a typically lively melodeath infused thrasher with a wonderful winding groove in the interlude, but needlessly throws in an ambient section that adds nothing to the song. “Can of Worms” has a similar template but also has a punky vibe to some of the riffs, as well a prolonged solo section with symphonic backing. It almost comes together, but it feels like they tried a little too much with this one. “Afterlife” has a nice crunch to the riffs, and the layered vocals of the chorus create a vast echoing effect that leaves a good impression, whilst “Ruled by Dominion”’s spritely, hammering groove and clean vocals atop droning melodies mark it as one of the better tracks on the record.

Listening through Reduced to Flesh, I can’t say I’m too surprised that Hatesphere have struggled to make any real sort of headway in their career. For every good song here, there’s two more that are just plain ordinary. The frustrating thing is you’ll find a lot of great riffs lost in the midst of the muddled and aimless song writing. That Hatesphere have been going for this long indicates they’ve a loyal enough fan base that will surely enjoy this, but for the rest of us, it’s a classic case of wasted potential.

Highlights: “Reduced to Flesh”, “Can of Worms”

Reduced to Flesh is available on October 19th via Scarlet Records, and can be purchased here.