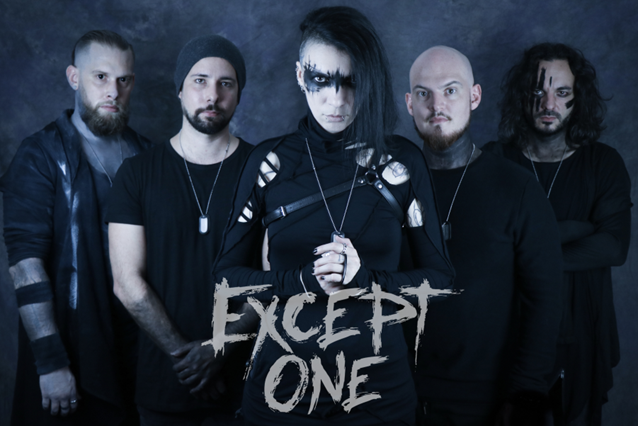 French metallers Except One have released a video for their latest single “Silent Scream”, taken from their latest album, ‘Broken’, which came out on January 15th 2022.

Vocalist Estelle had this to say about the song:

“The silent scream of inner sufferings that can lead to do something irreparable, despite the efforts and energy used to stay afloat and the promises made to close ones which won’t save you from drowning in the end.”

Except One was formed in 2011 and if the only original members left are Estelle and Junior, the current line-up gelled on stage. The new guitar player arrived mid-2018, in time for two of the biggest gigs for Except One then: headlining at the Nouveau Casino (Paris) and opening for Lacuna Coil at L’Empreinte (Savigny-le-Temple).

In 2019, Except One played a series of dates in Paris and all over France, before going on a small European tour, visiting Denmark, the Netherlands, Germany, Switzerland, France and Italy. With highlights like that first night in Copenhagen, the headliners, HateSphere, native city, a sold-out gig with, “a delirious welcome from the audience”, says Estelle. “The gigs I remember the most are those where fans come to talk to us afterwards. Before the last song, I always say that if they want to meet us, they can find us between the merch booth and the bar. Most often at the bar.”

The year ended for Except One with the Nantes Metal Fest. “We had a great spot, just before the headliner, around 10 pm. Great audience, a big pogo and walls of death everywhere.” They played a few more dates until February… And suddenly, it was the end of the world, right when they had started work on the new album. “We had a lot more time to work on it, to add finishing touches and a sophisticated production with more samples, something we had never done.”

Due to multiple lockdowns, the recording took place over several months, with a couple of days in the studio here and there. But you won’t find a trace of world pandemic on ‘Broken’. “We always have a ratio between personal songs and others that broach on social issues. We didn’t feel the need to write about what was going on. We’re lucky enough to have a close-knit band, nobody was left behind. On the contrary, we got closer even at a distance.”