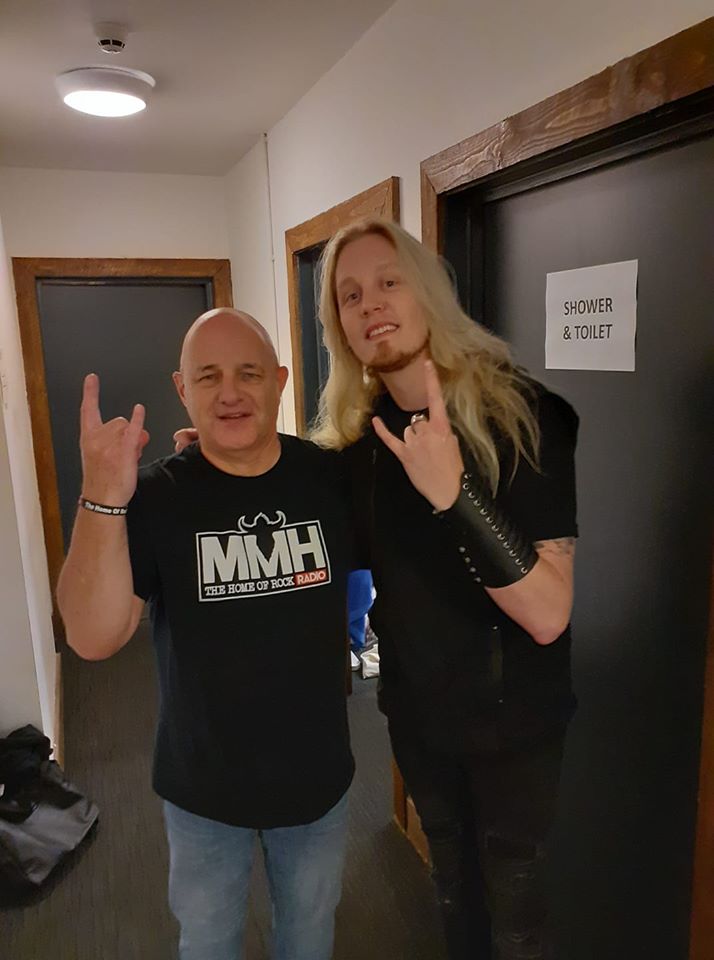 You always know what to expect at a Dragonforce show – red hot guitars, catchy choruses, insanely fast drumming. But the word ‘show’ is uppermost on their current UK tour, as I’ll explain later. The Tramshed in Cardiff welcomed all three bands on a bitterly cold Tuesday evening, starting off with McRocklin and Hutch. One virtuoso guitarist and another guy pounding out Eighties-style disco beats on keys just wasn’t my cup of tea, but at least some of the audience got into it. To me, it was half an hour of checking my watch and watching the floor; personally I would rather have seen a local band get their big chance.

However, no worries about the next band – Lovebites. A five piece from Japan, named after a Halestorm track, who they will be supporting in Tokyo on December 2nd. In a largely male crowd, the sight of five attractive girls in mini skirts was a winner before they’d even struck a chord, but they can certainly sing and play their instruments. No matter that the majority here tonight probably hadn’t heard any of their music beforehand because they went down a storm, even including ‘Sign Of Deliverance’, a track off their new album ‘Electric Pentagram’ which comes out on January 29th next year. Their singer, Asami, looks just like Mariah Carey and has a voice to match, while their two guitarists, Midori and Miyako, are demons on the fretboard, either rhythm or lead. I was pleasantly surprised by their set and I’m not being sexist by saying that. I’ll definitely be checking out their back catalogue!

And so, after a short wait, the music and lasers heralded the arrival of Marc Hudson onstage to start us off with ‘Highway To Oblivion’ from their brand new release ‘Extreme Power Metal’. Having chatted to Marc earlier (check the attached interview), I was prepared for some ‘extras’ early on, but even the cannon of white confetti caught me unawares, as it did most of the audience. I was still finding confetti in my clothes three hours later! As you’d expect, the new album is heavily featured, with six out of tonight’s twelve numbers taken from it, but the roar that met ‘Fury Of The Storm’ from their ‘Sonic Firestorm’ album was incredible. CO2 cannons anyone? Well they were the next surprises and boy did they impress, as did the hand held one that Marc was using. ‘The Last Dragonborn’ and ‘Ashes Of The Dawn’ followed and we were treated to the sight of guitarists Herman Li and Sam Totman atop their respective giant arcade machines on either side of the stage, soloing for all they’re worth. Another new one, ‘Heart Demolition’, brought us more confetti, before the instrumental solo section. You have to admire the musicianship of this band, right down to drummer Gee Anzalone. They lost their bassist recently but Damien Rainaud, who produced the new album, stepped in and did a great job.

All too soon, the title track of their ‘Valley Of The Damned’ album signalled the end of the gig. Really? You must be joking! Back they came with their incredible version of Celine Dion’s ‘My Heart Will Go On’, which is on the new album and it works so well. Finally we get ‘Through The Fire And Flames’ from the album ‘Inhuman Rampage’ and it had flown by.

This was a gig from a band at the top of their game, so obviously enjoying themselves onstage in their 20th year and the crowd went home totally satisfied. Oh and thanks for the confetti guys!

Huge thanks to Morag Farley for the use of her photos. To see her full gallery from the gig, go to https://mmhradio.co.uk/dragonforce-cardiff/