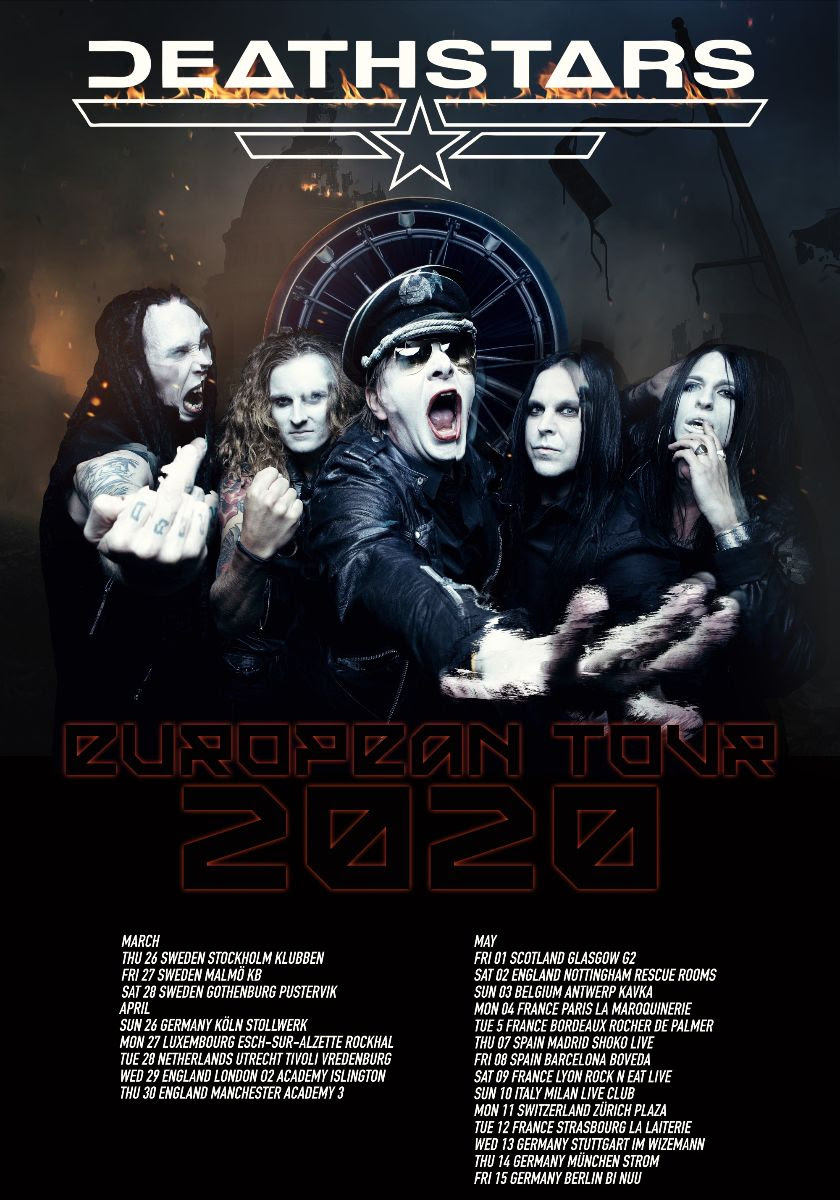 After recently reuniting with guitarist Cat Casino and celebrating their long-awaited comeback at major festivals such as Wacken, Graspop and Masters Of Rock, after a four year live absence – death glam sensation DEATHSTARS can’t wait to hit the road again and have announced the first dates of their upcoming European headline tour. The dates are set to take place in spring 2020, and the run includes four UK shows in April/May.

The band are currently putting the final touches to their upcoming studio album – the first since 2014’s The Perfect Cult – set to be released in early 2020 via Nuclear Blast. Keep your eyes peeled for further info to be revealed shortly.

The band commented: “We’re back! After four years of recharging and with Cat back in the band plus the manic Nitro on drums we will bring you one hell of a show. We can’t wait to be back on the road and meet all of you again! Naked or otherwise. Don’t miss it!”

Don’t miss the chance to catch the infernal five-some on one of the following dates next year!

UK tickets will be going on sale Friday 30th August @ 10.00am BST via the below links.

More shows in other territories are due to be announced over the next few weeks.

DEATHSTARS were formed in Strömstad, Sweden in 2000 – born of a variety of influences ranging from black and death metal, to rock ’n’ roll and industrial. They’ve released four full-length studio albums to date; Synthetic Generation (2003), Termination Bliss (2006), Night Electric Night (2009), and The Perfect Cult (2014). The band has stated that Synthetic Generation was a bit of an experiment and challenge, the members all having come from underground extreme metal bands, which was more familiar territory at that point. Termination Bliss garnered the group immediate attention, the band touring with Cradle Of Filth in 2006 in its wake – whilst follow-up Night Electric Night launched them internationally, lauding them enormous praise and landing them a tour with Rammstein in arenas throughout Europe. Latest album The Perfect Cult saw them continue their impeccable run – welcoming their first ever North American tour, and sadly the departure of Cat Casino, who has now returned to the fold.
More info:
www.deathstars.net
www.facebook.com/deathstars
www.nuclearblast.de/deathstars