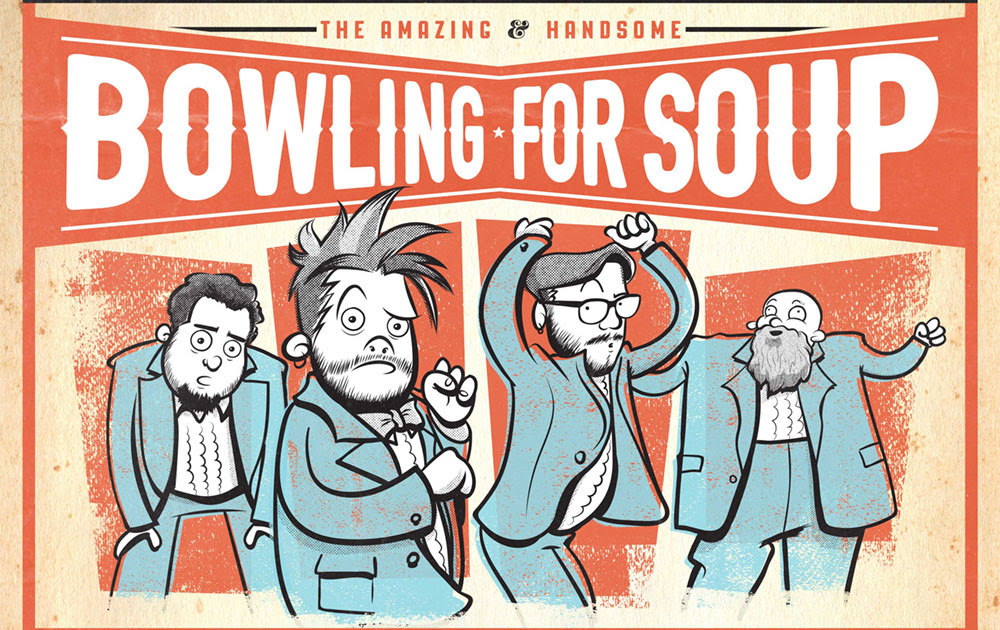 The video, for their new hit single Catalyst, which is already making serious waves on UK radio, is in keeping with the image of its creators – it is guaranteed to put a smile on your face. The video for Catalyst was directed by none other than Bowling For Soup frontman Jaret Reddick, who teamed up with longtime BFS video producer Jason Crocker to make the video with their new video production venture, Banned In Texas!

You can check out the video below:

On the subject of making the video for Catalyst, here’s Jaret himself to give everyone the lowdown:

“It’s been a while since we did a full on music video, so why not go big! It’s actually hard to imagine that I drove that car all the way across Dallas just a few hours before it was turned into a pile of rubbish! We had a blast shooting this one!”

The release of Catalyst comes as excitement for The Get Happy Tour is growing rapidly among Bowling For Soup fans all over the UK. With Bowling For Soup set to play their breakthrough smash hit album Drunk Enough To Dance in full for the first time plus a selection of their other favourites, “The BFS Army” have been granted their wish for a tour they have been waiting for for many years.

Throw in the comedic stylings of rock’s resident superheroes The Aquabats! and Get Happy Tour alumni Army Of Freshmen who are also going to be celebrating their hit album Under The Radar by playing it in full, and The Get Happy Tour 2018 will be something talked about for many years to come.

The Get Happy Tour 2018 will play nine shows across the UK in February 2018, culminating in two enormous shows at Cardiff’s Motorpoint Arena and London’s Brixton Academy. The full list of shows can be found below:

The Get Happy Tour 2018 – Bowling For Soup, The Aquabats!, Army Of Freshmen

There are now some shows on the Get Happy Tour 2018 that have either sold out or have just a handful of tickets left, and time is running out to pick up tickets for the remaining dates. To purchase both regular and VIP tickets (extremely limited numbers of VIP tickets remaining) for the tour please visit www.bowlingforsoup.com for all relevant information and links.

Get Happy 2018 is set to be an exciting time for everyone, and possibly the most excited person of all is Bowling For Soup’s own Jaret Reddick! Here are his thoughts on reviving The Get Happy Tour:

“I’m super excited about this tour! GET HAPPY is 11 years old! That’s just crazy! And I can’t think of a better way to celebrate than bringing it back, with Army of Freshmen from the original lineup and adding The Aquabats! on to make it even happier! Now I need to get back to relearning all of the Drunk Enough To Dance songs!!!”

In true BFS fashion, there will be no shortage of surprises on this tour. This Includes an actual tattoo studio on tour – something that fans of Bowling For Soup may have first experienced on Jaret’s UK solo Heartache and Hilarity tour last Autumn.

Jaret and long time tattoo pal Darren Hubbard (Old Sarum Tattoo) bring their all new RIPPT Tattoo studio direct to the venues! Offering a special collection of “tour tattoos”, this is the ultimate souvenir for the hardcore members of the BFS Army! The response to this idea has been huge, as Jaret explains:

“I had a feeling it would be a hit, but I am overwhelmed by the response! We are all sold out, even after adding 2-3 more artists in each city! Darren is gonna be busy…I am going to watch!”