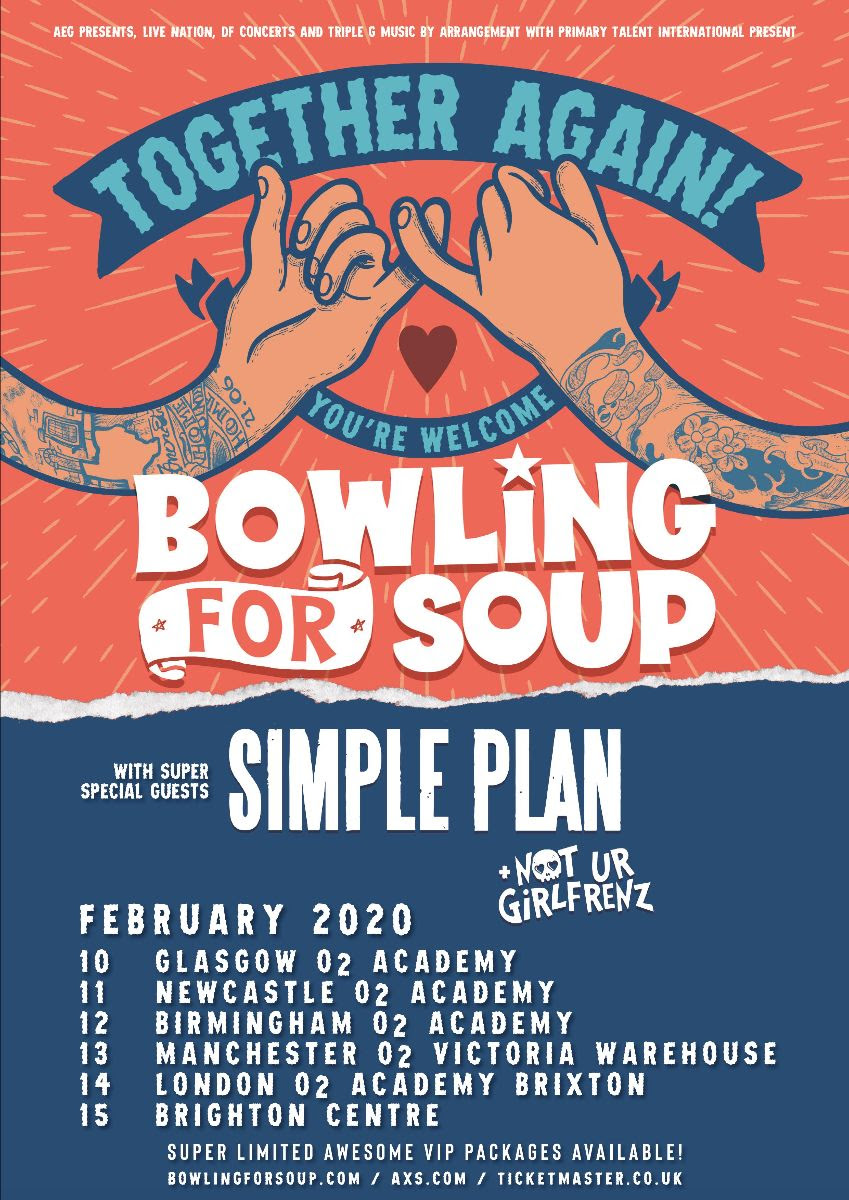 Pop-punk vets BOWLING FOR SOUP are paying tribute to the late, great rock legend EDDIE MONEY, with today’s release of an unreleased cover of his seminal anthem “Two Tickets To Paradise.” After a long adventurous search, vocalist/guitarist Jaret Reddick finally tracked down a recording of the song the band had made back in 2006 in order to properly pay homage to Money who recently passed away.

Watch the lyric video and read Reddick’s account below.

Two Tickets To Paradise is available to stream and purchase at all your favourite outlets right now, check it out at:
Amazon, iTunes, Spotify, Youtube & many more.
“When I heard about the passing of Eddie Money, we were doing a fly-up show, up near where Rob lives in the Poconos. We went to his favourite bar for lunch. The place is called Flood’s, and he never shuts up about it. We found ourselves in a really comfortable bar, with a great staff, cold Miller Lite, and great food. WE took over the jukebox and played nothing but Eddie Money. It was one of those times, where a song starts and you are like, “Oh yeah!!!”

I couldn’t get it out of my head that we had recorded that song before. And then I remember that we did some music for a movie, many years back, called “Two Tickets To Paradise”! Surely we recorded THAT song!!! I looked everywhere, through my stuff, but man, 13 years ago…Where would that be?!?! On a CD? I looked everywhere I could, but nothing.

I sent a text to D.B. Sweeney. Star, writer and director of the movie. Google him. You know him. He wrote right back! but…Nothing. He had “Ride Of a Lifetime”, a song that was in the movie, but so did I. I asked if he remembered us recording it. He said he thought so. I swore to everyone…”I know we did guys.” We weren’t sure they would get clearance to use the song, but we did it anyway.

The last hope was my great friend Casey DiIorio at Valve studios. We always recorded our tv and film songs there, as well as B sides and demos. But 2006?!?!?! We talked a bit. He kind of remembered. But it was a long shot. In those days, we recorded to two inch tape! That means, no computers. No storage place it could just magically be. He would have to physically find that tape, load it onto the machine, and even then, who knows what we had recorded, or how good it was!!

It took a few days. But he fucking found it!! Honestly, at that point, I was like, ok…Wanna just run me a mix and I’ll throw it out there? Casey insisted he remix it. Who am I to say no to that? So he took his time, and he did. We sent it to my friend Paul Logus to master it, and here it is!
A long lost cover of “Two Tickets To Paradise” that, honestly, without Casey, would have never seen the light of day! I sound young. And it doesn’t have the brightness of digital recordings these days. We should get ALL the indie cred on this, just for recording to tape! Enjoy it gang. RIP Eddie. And seriously, thank you for the insane arsenal of tunes.” – Jaret Reddick (and BFS)
BOWLING FOR SOUP are currently celebrating their 25th anniversary, and have been releasing new music, covers and originals, over the last several months, including their recent take on SUICIDE MACHINES’ classic song “Sometimes I Don’t Mind” The band has also been performing shows around the world this year and will be headed to the UK next. Upcoming dates are listed below.

Tickets for their upcoming February ‘Together Again’ UK tour with Simple Plan and Not Ur Girlfrenz, are on sale now, you can get them right now at: https://www.bowlingforsoup.com

Bowling For Soup are: