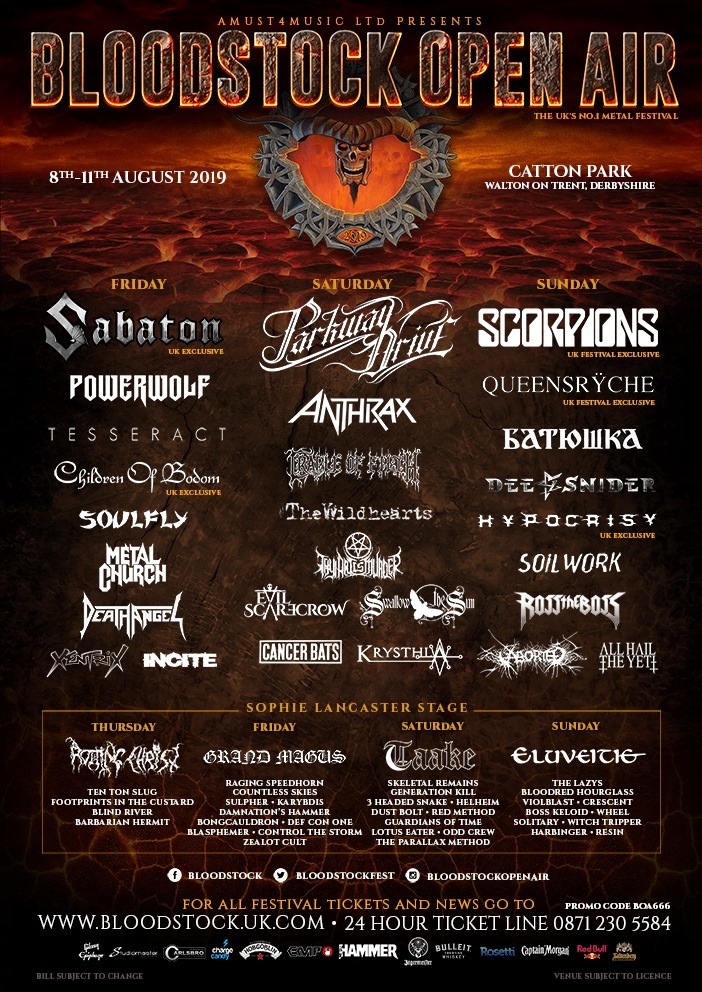 This is only my third year at Bloodstock, honestly – my preferred genres are Classic Rock, Heavy Metal, Alternative and some cross-over, so a lot of the bands that play Bloodstock are unknown to me, but I love the atmosphere, hanging with my friends and discovering new music… so I’m just helping out our main reviewers with my three favourite bands of the weekend – it’s pretty obviously Dee Snider, Queensryche and Scorpions… and here are my thoughts:

Dee Snider:
I’ve seen Dee Snider perform a few times in the last few years, so I knew he was not doing to disappoint and how right I was.  Dee last performed at Bloodstock with Twisted Sister in 2016 and he reminded us how familiar he is with English weather by imploring Mother Nature to give us a break… and actually, she did!
Dee also amused the crowd by stating that he had good news and better news – this being that he was going to play a bunch of Twisted Sister tracks and also some off his new record, which we learned very quickly was said tongue in cheek, as he laid down the rules that we were not allowed to use the ‘new track’ time to go take a piss.  We were to hang on for the drum solo for that, lol.
In as good a form as ever and sounding fantastic, the set included old Twisted Sister faves such as Under The Blade and Burn In Hell, new tracks including For The Love Of Metal, American Made and Become The Storm and obviously they performed my all time favourite and crowd pleaser ‘We’re Not Gonna Take It’ with as much energy as ever.  Dee Snider, as he said himself, is “not done yet” and neither should he be.

Queensryche:
One of my favourite bands of all time, how can this be Queensryche’s first time at Bloodstock?  And yet it is!  And here they are, the current incarnation of the Prog Metal band puts on a stunning performance covering songs from their stunning back catalogue of albums, including Queen Of the Reich, Walk In the Shadows, Empire, Operations  Mindcrime, Jet City Woman, I Am I, beautifully blended with tracks from their latest release and third album with singer Todd La Torre – The Verdict including Man the Machine and Blood Of the Leviant.
The performance is stunning, Todd’s vocals are outstanding and as he says “We are the one and only Queensryche”.  They always finish on the incredible Eyes Of A Stranger – Queensryche came to Bloodstock for the first time, and they conquered.

Scorpions:
I’ve seen the Scorpions only a couple of times over the years and they are undeniably a stadium/festival headline band – they have all the anthems you could possibly need and the only change over the years is slightly less running around the stage energy from Klaus, which I will forgive him for given that he’s now 71 years old.  Vocally he’s on form and sounding as good as he ever did.
The band ensured their set was bulging with hits from their back catalogue including The Zoo, Big City Nights, Blackout, Bad Boys Running Wild.  They had the crowd in the palm of their hands when the performed ballads Send Me An Angel and Wind Of Change, naturally ALL the camera phones went into record mode.
Though they are more Classic Rock than Metal, the crowd was huge and when they left the stage without playing Rock You Like A Hurricane, we all knew the drill… of course they were coming back, they are rockstars to the core and they would never let us down like that.
And there it ended… another wonderful year of metal in the middle of the Derbyshire countryside, with weather to confuse your mind and your wardrobe… roll on Bloodstock 2020🤘🏼
|
Bloodstock, Bloodstock 2019, classic rock, Dee Snider, gig review, Hard Rock, Heavy Metal, live review, Metal, prog rock, Progressive Metal, Queensryche, scorpions