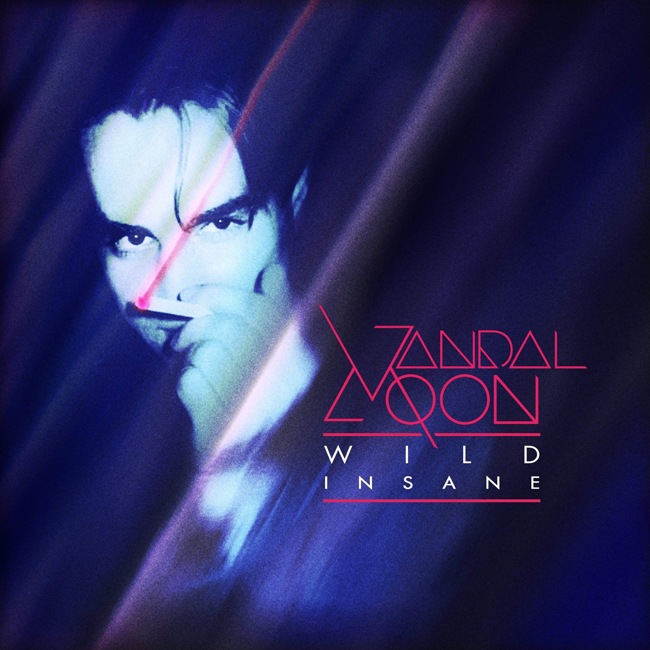 Vandal Moon….It has been a busy few months for me, finishing a film, preparing for a theatre event, launching an album and gigging with another band. However, I always crave new music. Even at my busiest I will filter through PR emails and fire new music into my playlist, to rumble away in the background. I’ve heard much to like recently but this release leaped from the playlist into my memory to the extent that I felt it necessary to take a break from other endeavors to pick up my virtual journalistic pen. The band was VANDAL MOON and the album is ‘Wild Insane’.

‘Synth wave’ is definitely a buzz word at the moment, and as soon as a genre becomes almost too hot to handle, there is a danger that a scene gets flooded with mediocre releases. I can gladly report that VANDAL MOON are far from such things and have delivered a solid, engaging and thoroughly enjoyable album. I can personally vouch for ‘engaging’ as track after track forced me to look up from fixing guitar pedal, preparing artwork and rehearsing lines to see what was playing on my jukebox.

Hailing from Santa Cruz in California, Vandal Moon formed in 2012 and features the duo of Blake Voss and Jeremy Einsiedler. The sound palette consists of vocals, guitars, synthesizers and drum machines. More specifically, you can expect a treat of vocal harmonies, skilful songwriting with a flair for the dramatic, layered and epic synths with a hefty low end all driven by solid rhythm programming.

The album requires no fanfare or moody introduction, instead opting to punch straight in with ‘Baby Sounds’ which has an unquestionably catchy bassline and synth melody hook topped off with a vocal that has just the right amount of pomp and bombast to lift them. This track is touted as an album highlight and it is certainly strong, but second track ‘Computer Love’ continues with a high standard, a bassline that you could swear you’ve heard somewhere but haven’t, symphonic synth work and a dramatic chorus. Excellent stuff. A softer dynamic delivers the title track and a slower tempo for the ‘The Bomb’ shows variety and maturity aplenty. Comparisons start to creep in my mind, Steve Strange singing Cure songs, or perhaps the other way around, wrapped up in a well produced modern sounding synth wave package. Fans of Carpenter Brut, Scandroid and so on will find much to like, and I am healthily reminded of the Miracle project of Daniel O’Sullivan and Steve Moore. ‘Boy Drinks Girl’ plays with a wonderfully squelchy bass synth and delivers a subtler number, while ‘Nevermore’ channels an inner goth with it’s chorused bass line and swirling guitars, and ends up sounding nostalgic but not at all stale. The album does not falter, ‘Crying on the Dancefloor’ is a slow burning anthem with an epic vocal hook in the chorus, and the album closes with the eighth track ‘The Light’ which ain’t shabby either, with an darkly emotional fanfare, and then it is over. Hardly a criticism, but I wouldn’t have complained if the album were a few tracks longer. Good stuff, good synthy stuff.